This is Part Two in a two part series about evaluating Yixing pots. It is inspired in part by Michael Wong of The Tea Gallery

And Now the Conclusion… 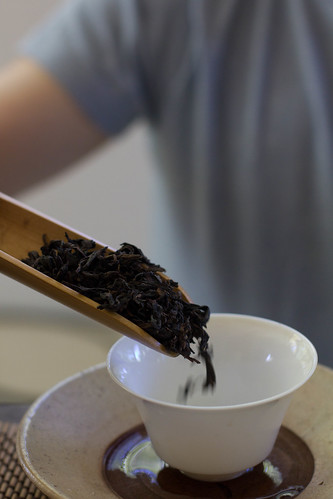 After testing the pot with water, the logical next step is to add tea to the equation.

The most obvious thing to do might be to add some leaves, hot water, and taste some tea.

Instead, this test allows you to diminish the differences in thermal properties or pour times that might add variables in such an experiment, and focus for the moment on the effect of the clay on the tea liquor. 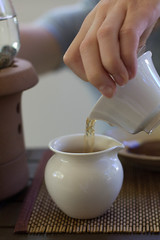 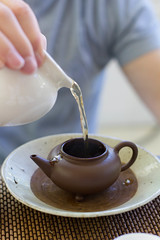 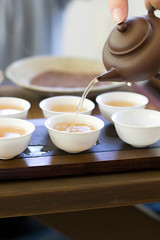 To have enough tea for the experiment, brew two rounds of tea in a gaiwan and combine them in your faircup. Fill the preheated teapot with half of the tea for the pitcher, and once again leave it for a moment.

In your matching cups, serve one cup per guest with water from the pitcher - being brewed in the gaiwan, this has no influence from the pot.

Next fill the second set of cups with tea from the pot, either directly or from a separate faircup. Taste the tea side by side and make note of the differences. We did our testing with an aged Lao Cong Shui Xian, and found that high floral notes were muted by the teapot. This might suggest that I was correct in pairing this pot with much deeper Hong Kong style roasts.

To expand on this idea, you should of course repeat this process with other teas. But I also like to share with guests the comparative strengths and weaknesses of two teapots by performing this method side by side. Instead of serving tea straight from the gaiwan and then from the pot, simply compare tea left in two distinct pots.

I can’t wait to hear what additional experiments you come up with.

This is Part One in a two part series about evaluating Yixing pots. It is inspired in part by Michael Wong of The Tea Gallery. The world of Yixing teapots can sometimes seem a daunting mystery. Among tea lovers, few subjects garner so many strong opinions. Preferences among collectors can be based on size or shape of the pot, the type or quality of clay, age, or craftsmanship. In this short series, we make no claims about the desirability of any of the above properties.

One year after our first meeting, inaugural members of the NYC Tea Club gathered once again at The Tea Gallery. When all the guests finally arrived, Winnie suggested a matcha to lift everyone’s spirits. She prefers to use a new tin of matcha fairly quickly to enjoy its freshness, and fearlessly ladled several large scoops of bright powder into her chawan. The initial result was some of the strongest Usucha style matcha I have experienced.