The Green Puerh class hosted by Timothy and Michael provides an opportunity for something a bit different from our usual fare. 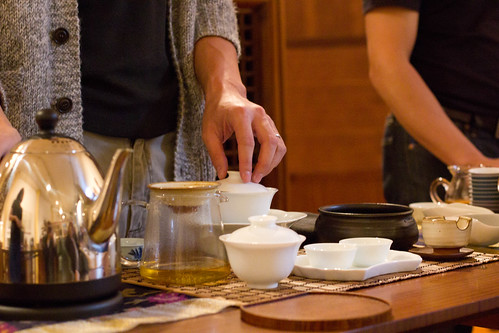 The duo did their best to explain the differences between the small batch and factory teas, but having a full house of new and old tea lovers alike, a number of insightful questions arose.

Why is one cake looser than another? 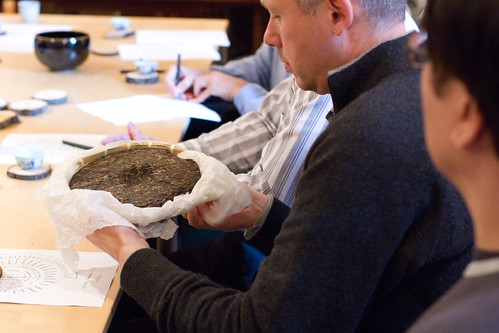 Factory standards are most often produced with hydraulic compression, which usually results in a fairly dense tea cake. The tea businesser who commissions a special production may request that the cake be compressed in the old style - the bag of tea leaves to be pressed is placed between two parts of a stone mold, and a worker stands on top of the mold. Compared to the mechanized approach, this yields a loose cake, where one can easily flake off a piece by hand.

Why not loose tea?

One guest noted that we often enjoy puerh tea in loose form as we do with oolong. So why do we see most puerh end up in compressed shapes?

The reason, as most readers have already guessed, is ease of transport. A dense tea brick takes up much less space than the same weight of loose “mao cha” and made a more efficient use of carts traveling on the Tea Horse Road.

Much further along on our temporal Tea Road, we have discovered that blending and compression (now favoring cakes over bricks) results in a more complex aged tea when compared to loose puerh.

OK, I get the different ‘blends,’ but what does this Recipe Number mean?

At first sight, we often have nothing but an opaque number and our own senses to go by when judging a factory tea. 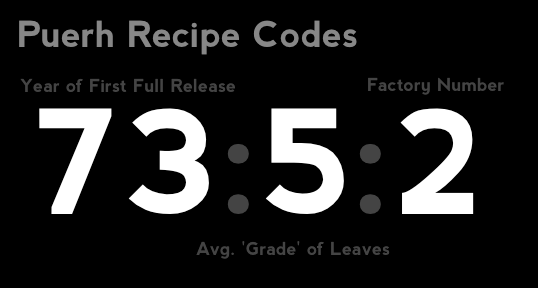 I decided the best way to break down the code is in a graphic - I hope this will not offend the designers in the audience too greatly.

The first portion needs little explaining - this 7352 blend was first used in 1973.

The “average” grade of leaves I believe to be somewhat subjective. Puerh leaf is graded by size, 0-8, with 8 being the largest leaves. This is simply a measurement and not qualitative - that is, there is no ‘better’ end of the scale.

A cake is a blend of several grades, and the middle digit represents a rough estimation of the mean leaf size.

Please elaborate in the comments if you can do better!

The final digit represents the tea factory who processed the cake. Under socialist control, there were 3 factories of note.

All three factories are operated privately today under the same numbers, but many other numbers have been added. Cataloging them is left as an exercise to the reader.

Say, what’s that other number?

OK, nobody asked this, but anyone still reading obviously has a strange fixation with numbers, ala Lennon. 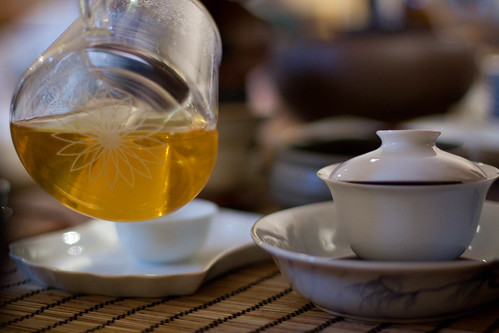 Today, a second important number is printed on the face of a Dayi wrapper. It indicates the year and batch of production. Ex. 801 represents the first batch of 2008, while 809 represents the 9th batch of the same year. Some collectors seek out the 1st batch each year, while others contend that the quality of each batch is indistinguishable from another. Quite often, the first batch is sold at a small premium.

This batch labeling began in 2004, but the astute reader will notice that this short hand only accounts for a 10 year span, and the planet recently turned a decade older. 2010 productions, 2nd batch begin again as 002.

Usually, the year in long form will be printed on the back of the wrapper, so no need to worry about the sorry lives of tea anthropologists in the distant future (after all humans are killed by poisonous robo-gasses).

When did Menghai become private?

Menghai Tea Factory started producing commercial products in 1989 under their own Dayi brand. By 1996, all of the products were of the private brand. During the transition period, foreign tea orders (including Hong Kong) were made only via the government’s CNNP, until reforms finally allowed the original tea factories to fill orders directly.

Many of these details are less important than the experienced gained by drinking the tea itself. The way the tea tastes, lingers in your mouth and throat, and the way that it makes you feel are the most important parts of judging the tea. But the curious among us simply cannot resist digging deep into the provenance and history of tea.

Perhaps this short primer will inspire someone to take a closer look at some facet of tea they have yet to uncover.

There have been wild accusations around the ‘net of me being one to spill the beans. To live up to this unsavory reputation, I offer you all a tour of the as-yet unnamed collaboration between The Tea Gallery and The Mandarin’s Tea Room. Somewhere along the way, we noticed that the phrase “The Tea Gallery slash Mandarin’s Tea Room” is a “mouthful." There are still mountains of boxes to be unpacked, but I was invited to visit the new tea room on the twenty-sixth anniversary of my birth. 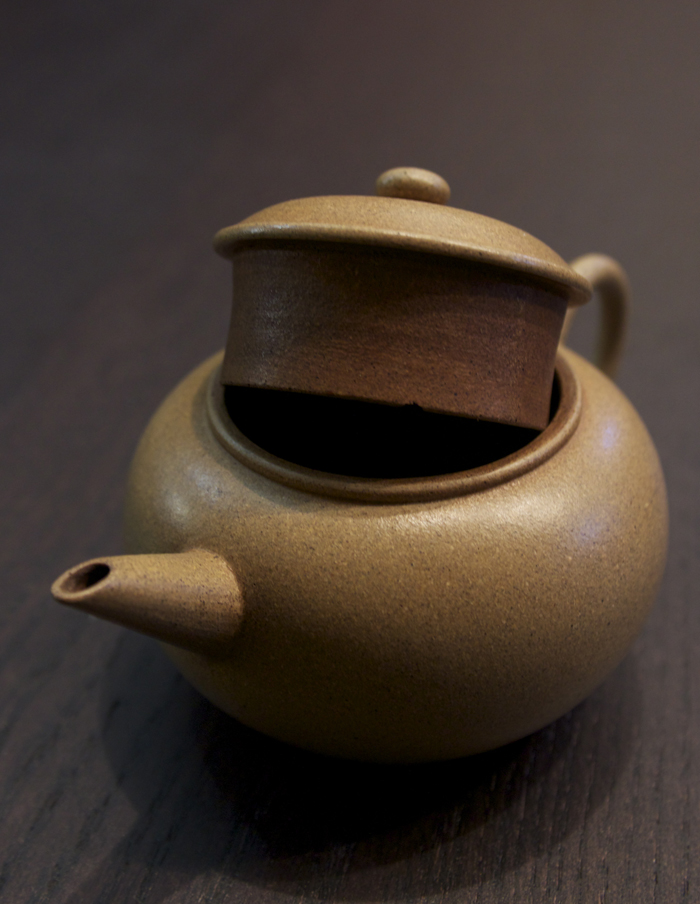 “The old teapot is different from the newer teapot because… the craftsmanship is very obvious.” Kingston teaches us about a pair of late Qing dynasty Shui Ping style Yixing teapots - made of Duan Ni clay - for King Rama V of Thailand. “It’s ability… when it’s perfect, but not mechanic. When it’s mechanic - it’s like you are printing a straight line with a computer, using a printer.