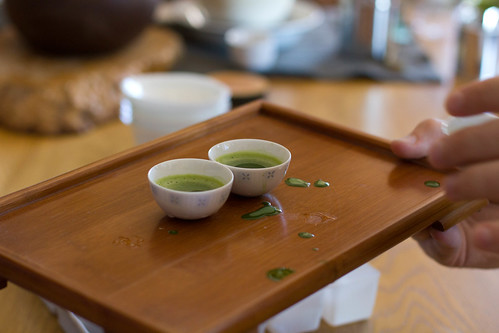 One year after our first meeting, inaugural members of the NYC Tea Club gathered once again at The Tea Gallery.

When all the guests finally arrived, Winnie suggested a matcha to lift everyone’s spirits. She prefers to use a new tin of matcha fairly quickly to enjoy its freshness, and fearlessly ladled several large scoops of bright powder into her chawan.

The initial result was some of the strongest Usucha style matcha I have experienced. 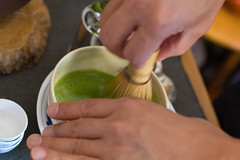 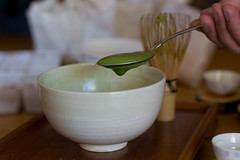 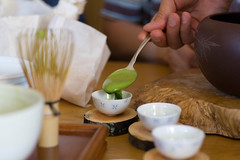 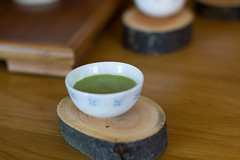 Not one to be outdone, Michael stepped up to prepare a second round of matcha, this one even thicker than the first. The texture of his tea was no less than a mousse. The quality of the tea shined through here, revealing no bitterness even at this concentration. 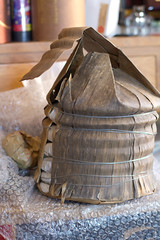 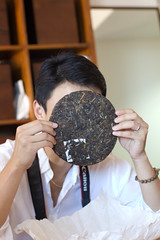 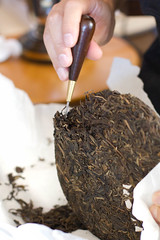 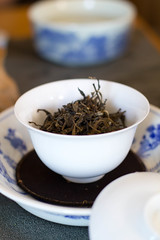 Michael brewed two rounds of green puerh to contrast their unique character. The Mandarin and I goofed off for the camera. 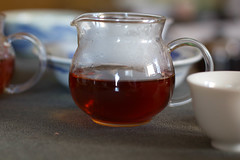 The Mandarin got serious with a 1960’s baozhong.

His source tells us that this was prepared in an earlier style for baozhong than the fresh spring greens we enjoy today.

The dry leaf smelled of honey suckle, and the tea produced a strong feeling in the throat. Perhaps his blog will soon educate us on baozhongs now and then. 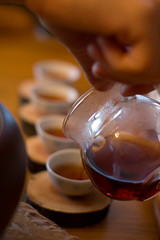 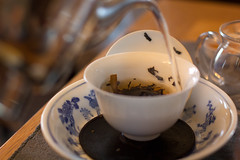 I had a chance to brew next, serving two aged Liu An. The first was a bit of a mystery, and although smooth to taste, it gave some guests a slightly uncomfortable feeling.

The second had a stronger earthy aroma but was already showing signs of sweetness and a comforting feel. Winnie plans to continue aging this tea, hoping to recreate the soothing feeling of her favorite aged Liu An. 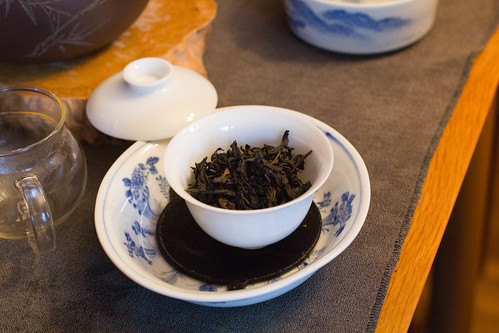 Starting to feel hunger pangs from all the old tea, we agreed to end with Michael’s speciality, a Wuyi rock tea. He selected one easily, but reminded us to taste first, ask questions second. It was revealed to be a 2004 Tie Luo Han.

Everyone enjoyed the aged aroma of the tea, but we had to rush out to satisfy our cravings for spicy and greasy food at a Sichuan restaurant.

The group parted from there, ready to embark on our second year of tea discovery.

This is Part Two in a two part series about evaluating Yixing pots. It is inspired in part by Michael Wong of The Tea Gallery And Now the Conclusion… After testing the pot with water, the logical next step is to add tea to the equation. The most obvious thing to do might be to add some leaves, hot water, and taste some tea. Instead, this test allows you to diminish the differences in thermal properties or pour times that might add variables in such an experiment, and focus for the moment on the effect of the clay on the tea liquor.

There have been wild accusations around the ‘net of me being one to spill the beans. To live up to this unsavory reputation, I offer you all a tour of the as-yet unnamed collaboration between The Tea Gallery and The Mandarin’s Tea Room. Somewhere along the way, we noticed that the phrase “The Tea Gallery slash Mandarin’s Tea Room” is a “mouthful." There are still mountains of boxes to be unpacked, but I was invited to visit the new tea room on the twenty-sixth anniversary of my birth.