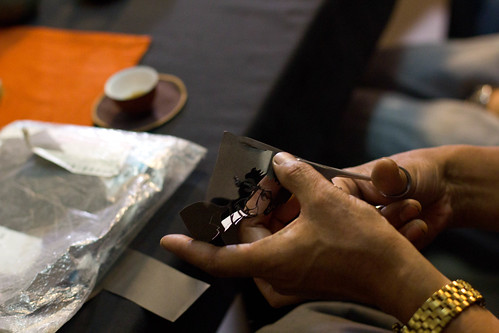 Mr. MingLiang Lu made a surprise visit to tea with us. He humbly introduced himself as an “art teacher.” After a few rounds of tea, he produced some small sheets of black paper and a pair of scissors and began cutting. Within minutes, a detailed image of Kyle’s face emerged. 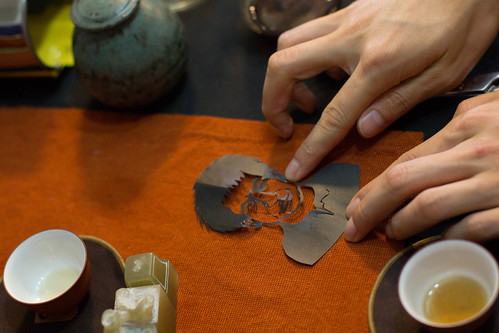 He mounted it with two small pieces of tape onto beautiful paper bearing his chop. I wondered at first why he seemingly put so much care into the cutting and the mounting seemed so simple. Upon closer examination, I realized that the crease down the middle and the very gentle mount allow the work to rise up from the page and give the portrait depth. 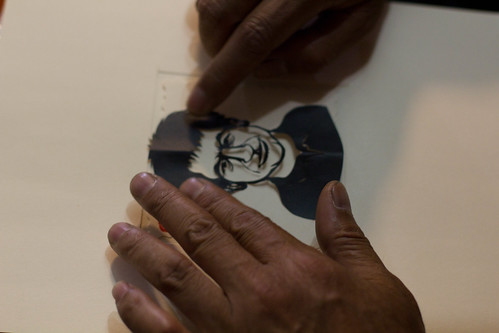 He even made my portrait while I continued to brew tea. 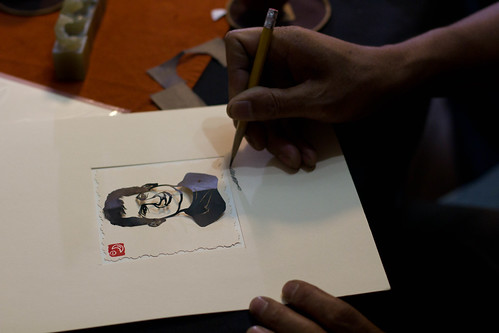 Ming currently has works on exhibit at the American Museum of Natural History in New York.

I usually pride myself in being able to rattle off the 8 to 10 teas we drink during the course of a meetup. However, in the company of Dae and David I finally met my match. Dae says she hasn’t drank this much tea since her trip to Taiwan - I am indeed struggling to remember every tea. I’ve done my best to recall them in no particular order. 1996 Huang Yin - Sun Sing 1997 Menghai 8582 1980s Xiaguan Traditional Characters 2004 Silver Tip Puerh - The Tea Gallery

We made our second trip to the Royal Orchid Tea Museum, currently under a serious program of improvements. The event carried a water theme - an exhibition of Shui Pin Yixing teapots from Ming to modern, and, a sampling of several Shui Xian teas. I offered two pots of my own - 1970s hong ni and 1930s zi ni. Kai suggested my elder pot was originally made for export to Japan.